Birmingham Restaurant Week will host foodie-favorite events that feature delicious food, wine, cocktails, beer and more! From sophisticated wine and food pairings, to bringing back our signature Preview Party – that is typically a sold-out event every year – your taste buds, heart and soul are sure to be set on fire from the YUM we are cooking up for our community. Join us for our Preview Party and Wine-O-Logy events, and get a taste of adventure one sip (and bite) at a time! 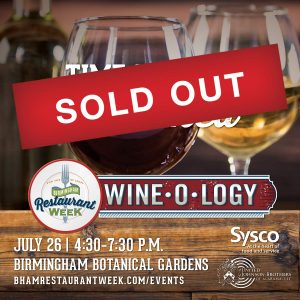 Get ready for a POURfect night! Wine-O-logy is a wine flight tasting event featuring wine provided by United-Johnson Brothers of Alabama and delicious hors d’oeuvres from Sysco Foods. This is a must-attend event taking place at Birmingham Botanical Gardens and The Gardens Cafe by Kathy G, one of Birmingham’s most beautiful venues! The event will span throughout the gardens and inside the cafe.

Please email info@bhamrestaurantweek.com if refunds are needed due to date change. 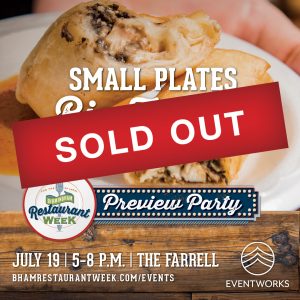